I've discovered that the thing that really disappoints me most in the world is fakery. I respond to it now not with the unmitigated anger I think I possessed in my youth, but nowadays more with a kind of weary sadness. A deep sense of dismay sweeps over me whenever I hear a band with a singer who really just wants to be another singer. Or branded lemonades like Sprite that don't taste like lemonade at all. Or that time I heard David Cameron speaking to a member of the public about how much he hates self-service supermarket checkouts. I've even realised that the whole reason I'm against royalty isn't really the issue of class as I convinced myself it was when I was that angry young man. It's that the whole business is so utterly artificial it takes a logical effort of incredible proportions to give it even a small amount of credence.

So inevitably I became giddy with pleasure on encountering the bands and artists of the Melting Records stable, arguably the least fake music in the world at the moment. You'll see what I mean if you catch my September Dandelion Radio show and listen with especially undivided attention to the tracks from Nameless and The Fuzz, both bands who form part of the aforementioned label's enthralling body of work and who are doing more than anyone in the crucial battle against fakeness in the world of music. In fact, you won't even need to listen with that much concentration, because chances are you'll find yourself grabbed, assaulted, perhaps even ravished by their unvarnished and highly appealing racket.

While The Fuzz offer an untidy and irreverent take on what I suspect initially starts out as some variant on blues rock, Nameless take any rule book you care to mention and shred it, spit all over it and then bugger it sideways. I remember Nick Kent writing about seeing the pre-Lydon Sex Pistols in rehearsal for the first time and expect it probably sounded like this, except I suspect Nameless are actually far better. But I wonder how many bands start making an unholy row like this, check themselves and say 'we can't put this before the good people of the public' then turn into Kings Of Leon, Foo Fighters or any of a thousand dullards who make up far too much of the rock canon?

Even the way Melting Records got in touch was refreshing, a long, rambling but essentially very genuine attempt to tell me about what they're up to and suggesting that, having caught a recent streaming of my show, it might be the kind of thing I'd like. I become genuinely aghast at DJs from the likes of 6music saying things like 'I never listen to unsolicited demos' and wondering how on earth you then get to even listen to new music, not to mention be surprised by anything ever, and the thought that the kind of approach from Melting Records would be unlikely even to be read by so many 'tastemakers' (anyone who calls themselves that has nothing at all to offer in any capacity, by the way) makes me want to set fire to things.

In short, to say the stuff that Melting Records is putting out has a raw and unrefined quality is an understatement of silly proportions. This is music so untempered by commercial considerations it makes everything that is so tempered appear laughable in comparison. More power to Melting Records' elbow. Find out more about them here and, as Melting Records advise, buy their music, buy their T-Shirts and download them illegally.
Posted by Mark Whitby at 05:30 No comments: 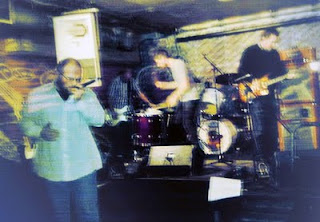 Used to seem like it was some kind of musical law...and The Chasms have outstripped all of the superlatives I've ever employed to describe them in the process of breaking it. The Clash recorded 'Give 'Em Enough Rope' bookended by a couple of masterpieces. The Smiths had a certain creakiness in their debut effort and frankly I was never fully convinced by 'Meat Is Murder in its entirety either'. The Pixies followed my favourite albums of 1988 and 1989 with the listenable but unspectacular 'Bossanova'.

In short, history dictactes that releasing three breathtaking albums in a row is never done. But The Chasms have now not only done it, they've done it locked away in a barn in the Isle Of Man, made it available for free, and far too little is being written about it. Their latest album 'Alchemical Postcards', available for free download at www.thechasms.co.uk (and shortly available for purchase in CD form) follows last year's 'Index Of Spirits' and their debut 'Advance Paranoia, Advance' as the latest in a series of mesmerising releases by what we must surely now label the world's best band. At least I'm going to anyway.

I'm featuring a track in my September show on Dandelion Radio, a new version of 'A Copse Of Trees', which originally appeared on Dandelion's 'Five Years' anniversary compilation earlier in the year. Last month, along with some of my colleagues, I played and marvelled at the incredible 'The Occult Soul Review' and, judging by their comments, I wasn't the only one to be left breathless by the experience. A clear and serious contender for the best track of 2011, and it almost doesn't need to be added that all six tracks on 'Alchemical Postcards' offer a similarly magical sledgehammer impact to the listener, the effect of which borders on the physical. Playing tracks from it on the radio is actually a perilous business. Hard to keep to the time-honoured rule of 'no dead air' when you've just played something that leaves you as stunned and speechless as this.

What continues to remain perplexing is that The Chasms don't appear to have the kind of enormous audience they richly deserve. I'm aware that this statement can sound naive, aware of course that this can be said about so many fine bands, many of which we play on Dandelion Radio. But in their case it really does surprise me that anyone could hear them and remain immune to their music's effects. It would have to take my view of humanity down yet another notch, I fear. I live in a world that not only can vote in the likes of Bush and Cameron but also fails to succumb to the wonder of The Chasms in such large numbers? Perhaps they'll follow the Velvets, Can and Nick Drake in finding only a restricted audience at the time of their greatest potency only to be regarded as inspirational geniuses by future generations of music lovers.

I don't know. All I know is that if you don't take the opportunity to get hold of Alchemical Postcards right now you'll not only be missing out on free great music that comes, you'll also be putting yourself in a position of being asked by your grandchildren, 'What were you doing while The Chasms were around?' and having to answer something like 'Shuffling around me Kings Of Leon records'. It's not an option.

Get over to that website now and treat yourself to the sound of the greatest band to appear this century. Or future generations will know you by your folly.

In session in my September show: The Sinatra Test

If you've listened at all to my show over the past 12 months (and, unless you've been in Antartica or space, the only two places who've yet to receive Dandelion Radio so far as I know, I'd want to know why) chances are you'll have encountered the music of The Sinatra Test, a project of the venerable Phil South featuring apparently effortless arch languid grooves that so caress the ear you'd think making original and innovative music seem so much easier than it really is. Or maybe I've got that wrong. Maybe it is as easy as this and it's those who put so much effort into making derivative pap that have misled us on the issue.

Whatever is the case, there's an ambition at play in The Sinatra Test's music that's underpinned by such an effortless vibe you can fail to notice just how hard Phil's working to make us all feel so good. A case in point is the session The Sinatra Test have recorded for my December show, streaming at various points throughout this month on Dandelion Radio. You'd swear blind the tracks were filled with sampled voices and sounds, all easily picked up and assembled together like some highly pleasing collage. But you'd be wrong, because Phil's provided them more himself, a triumphy of artistry so rare you could present it raw on a plate and pronounce it done.

And the ease on the surface sometimes belies much darker elements beneath. Among the session tracks, 'Pointlessly In Brackets' is a terrifying tale of thwarted obsession that, by the end, has you so petrified at the prospect of the phone ringing while 'Wodehouse Whippet Bingo' delivers, through a series of epigrammatic pronouncements, the kind of dissection of 21st century mores that most songsmiths would fail to achieve with several pages of lyrics and several pints of sweated blood.

The Sinatra Test have also just released their highly anticipated album 'Do Be Do: 10 Songs About Being and Doing' on Bandcamp containing at least four songs you may have heard on my show in the recent past, one of which, 'The Beat Degeneration' ranks among the finest tunes I've heard all year, from anyone. Get it here.

As for the session, Phil has provided some helpful accompanying notes on the four tracks below:

1. Pointlessly in Brackets (3:44)
A love song to stalker movies. I imagined a large girl with thick Andy Warhol glasses and a pink cardigan who spends all her time on the Internet. She has convinced herself that the cute boy across the street is her fiance. I call her Tracy Love. Like many TST tracks it's a mini movie. Lounge jazz with creepy oboe.


2. The Towel Begins (3:52)
Another piece of surrealist poetry intoned by what I call the Leonard voice, similar to the one I used on "Zombie Sundae". I call him Leonard because he's part Cohen and part Nimoy. An 808 drumbox collides with David Lynch guitars and Miles Davis style trumpet stylings. Stand back everyone, I'm a trained surrealist...


3. Wodehouse Whippet Bingo (3:13)
Someone in a PG Wodehouse novel had a whippet called Bingo, so voila, song title. This was the last track I did so the words are inspired by much more recent events. Desi style tabla drums and tape echo with fuzz bass. Voice is based on my Uncle Dil.


4. Chant Boxer (5:17)
I have this little plastic chant box about the size of a deck of cards, and it plays buddhist meditation chants through a little speaker. I sampled it to see if I could figure out the chords and play along with it, and it got away from me. The singing voice is called Lala, one I've used for other tracks. A dub style meditative steady state tune.