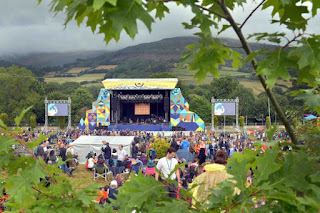 This being my tenth review of the Green Man Festival in the last eleven years, you'd think I'd be running out of things to say.  Not so.  Although the 'best ever' description is one I've used before, it's not difficult to find new superlatives when you get back from the exhilarating experience that was Green Man 2016, muddy and smelly but reflecting how, remarkably, this one really did manage to outstrip all others.

There are certain very rare experiences, across many fields of human endeavour and recreation, where you feel things are going your way and are about to get better no matter what happens - that fate cannot stand in the way of the inevitable upsurge of a great time.  Such was the feeling that hummed around the Far Out Stage of the Green Man on Thursday night, when the remarkable twisted sound experiments of Meatraffle drifted out into the still sunny surroundings.

From there the sun frequently disappeared, giving way to thrashing showers and high winds, but the mood never dimmed and the Far Out continued to play one of its most memorable hands ever.  The Membranes delivered a typically forthright punch to the solar plexus that throbbed lovingly well into Friday afternoon; then Suuns produced a set that managed to top the one they so memorably unpacked in the same place five years ago.  Geoff Barrow's BEAK>; just about topped them both on the Saturday, their set of pummelling, winding noises encircling a crowd that wasn't so much entranced as part of the entrancement.

That's why reference to the music alone isn't quite enough to describe the particular joys of this Green Man.  I've raised mild concerns in recent years about a creeping atmosphere of sniffy cynicism discernable among certain purist elements, alongside a fear that the festival was also becoming a camping weekend for people who could afford simply to lounge around soaking up an atmosphere to which they contributed nothing, leaving their own tents only fleetingly to park their seats in front of the main stage and read the paper.

Such elements seemed, for whatever reason, entirely absent this year.  A buzzing sense of anticipation encircled all the arenas; men and women older than me walked around in Belle and Sebastian t-shirts, while teenagers strolled about with The Smiths and Joy Division plastered across their chests.  Two kids, wearing unicorn and rabbit heads, danced manically, for ages, to the vintage disco being pumped out of one of the stalls.  Two teenage girls performed the most astonishing improved dance routine up and down the Mountain Foot stage steps as B&S performed in the rain on the last night.

Excited and enthusiastic talk of what had been seen the night before reverberated with a gleeful sense of un-blinkered discovery around the grounds each morning.  A guy in his sixties conversed with me about the many wonderful manifestations of Malcolm Middleton, before bashing away enthusiastically on the steel barrier as he (Malc, that is) performed a storming set at the Walled Garden on the last night.  During the headline act's Sunday set, Stuart Murdoch invited dozens of fans up to fill the stage during 'The Boy With the Arab Strap'.  As they left, one young woman grabbed a microphone and yelled 'Fuck Brexit' to rapturous cheers from the crowd.

Perhaps that was part of it.  The post-Brexit need for communal enjoyment bringing out the best in people.   Opposition to this act of economic and cultural vandalism was certainly voiced from the stage on numerous occasions and drew rapturous waves of approval every time.

Middleton's set edged it in terms of the Walled Garden's many highlights, but there were many close challengers.  The gentle reflections of Steven James Adams offered poignancy, honesty and genuine warmth.  Happy Meal Ltd produced an astonishing set on the Sunday, taking glam rock sensibilities, rubbing them howling into brashly displayed torsos and delivering an irreverent, musical Bronx cheer into the bargain.  Throws were bewitching, yanking the founding members of Tunng back somewhere close to their magical roots.  Bill Baird and band crashed through a ramshackle set of gloriously melodic tunes, a kind of slacker-embossed wonky pop that's been so good for so long and it was great to see it performed here.

The Mountain Foot offered its own delights.  Belle and Sebastian's closing set on the last night was magical, a fully rounded romp through one of the finest back catalogues of modern times.  Yorkston/Thorne/Khan produced a lovingly crafted live run-through of what has been one of 2016's best albums so far.  Tindersticks were slickly enigmatic, with disguised musical punches popping up all over the place - everything you want them to be.  And people keep telling me they don't understand why I like The Unthanks so much: whatever it is, I grabbed the opportunity to see them for a second time here and wasn't disappointed.

In any other year, that final Belle & Sebastian set would have been the undisputed highlight of the weekend.  However, nine years ago Battles played a set here that I regarded - and still do - as one of the best gigs I've ever been to and it seemed too much to expect they'd get anywhere near it on this much-anticipated return.  They duly smashed it.  A full ten minutes before they came on the Far Out marquee was humming with expectation.  Then they arrived to deliver a phenomenal set that included, among other delights, a revised version of 'Atlas' that managed to do everything the old one did, and add, incredibly, still more.

The same might be said of Green Man.  I really didn't think there could be such an improvement on the many hours of exhilaration I've enjoyed at Glanusk Park in the past.  I was wrong.  The one cranked it up another notch, one I didn't know existed.  Highlight of the year - indeed, of any year.