The Infinite Three - Crust Of Utopia 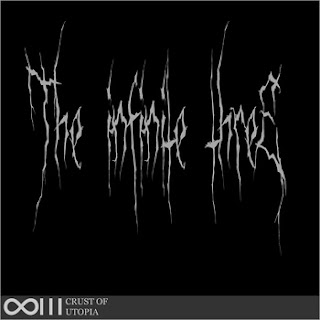 Always a good sign when a band contacts me via a mutual interest in The Chasms, yet somewhat perilous given that few could hope to match the admiration I hold for the Isle Of Man threesome. Thus did The Infinite Three pass the initial taste test. Faced with the obligatory and much more demanding 'But do they have anything to offer other than just good taste in music?' test, I was pleased to report that they passed this with almost conspicuous ease. Only the 'OK they're good, but do they have anything new to offer me?' test to go. Result: flying colours.

Thus did The Infinite Three's 'Crust Of Utopia' album find its way into my life. Unlike the aforementioned Chasms' latest opus and its sledgehammer attack, it's an album with a brooding presence, somewhat akin to opening a difficult can of beans with a broken tinopener, only to find that there is much more than merely beans inside, and that what does lurk within the can is actually wonderfully unclassifiable. Opener 'Lights Out For The City' lulls, fades and generally creeps its way into your life and under your skin. 'Blooms Of Immediacy' - which I play in my October show on Dandelion Radio - is, I believe, the third track I've played on my show to feature direct quotations from a William Blake poem. I'll leave you go guess what the others are, but aside from this the mystical Blakean presence is there throughout the album, not in the playful way it permeates, for example, Billy Bragg's 'William Bloke' album, but with the sinister, mystical undertones that infuse Blake's original works and in particular the challenging sparks that fly off the best of his innocence poems as well as glimpses into the dark hearts of experience.

I could easily follow this with a full pararaph on Blakean spiritual influence, but far better to discover 'Crust Of Utopia' for itself, delighting in picking the scabs from its sumptuous surface, bathing in the piranha-infused wash of its growling guitars and allowing yourself to prowl amid its sub-gothic dialectic. The Infinite Three don't offer easy routes into their music. Theirs is the messiness of dark art and not the clean dissection of science. They offer a world of conundrum and colour, of the visceral and the virtual in unbalanced but unquantifiable amounts, of the cinematic and the savage.

There's an uncommon depth to all you find here, even within the relatively accessible 'Is Erased' while, in the midsts of tracks like 'Three Blooms Dub', The Infinite Three test the fabric of their own universe with a drone that leaps into something even more startling somewhere around 4.21. Abandon yourself and enter.

You can get hold of a copy of 'Crust Of Utopia' at their bandcamp site - download is 'name your price' while a limited edition physical copy is damn good value at £5. And you can find out more about The Infinite Three here