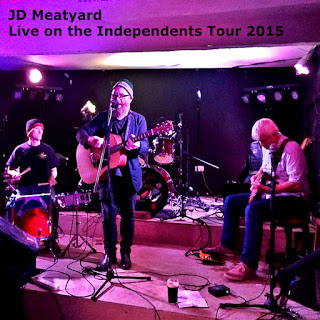 I hadn't realised just how much we needed a JD Meatyard live album.  In John Donaldson's recorded work, he's capable of pinning down the world with all the precision of a knife-thrower skimming his blade just past his accomplice's ear,  And when he has someone other than an accomplice to throw at, he tends to make sure he hits.

Live, he doesn't lose any of that, but adds much.  Combining the spirit of a crazed preacher and Phil Ochs after someone lit him on fire, Donaldson reels off his retorts at the modern establishment with a combustible precision that leaves compromise floundering on the floor like a spend beast and the victims of his ire branded.   You don't forget a JD Meatyard live performance and you certainly don't leave it with any uncertainties about where he stands.

All of which makes this live album a more than welcome addition to a body of recorded work that, from his days in Levellers 5, now spans close to thirty years.   He certainly hasn't mellowed with age - if anything, the opposite.Donaldson fires off a classic from his Calvin Party days - 'Lies, Lies & Government' - with, it seems, greater ferocity than ever and the spirit is matched in a caustic rendition of 'Taking The Asylum'.
Yet that he can combine this with the deeply human tale of 'Anna Had a Kid' and the confessional 'Sorry Song' illustrates his extraordinary depth both as a songwriter and a performer.  There's no sense of a lull in proceedings or an opportunity to get the beers in while you wait for the next polemical outburst: he takes his audience and his listener with him.  Mistakes are part of the human condition, he's saying: those who use that exploit that condition for gain and subterfuge are those that deserve our ire.
The performance reaches a brilliant crescendo in the form of a seven minute version of 'Standing on the Shoulders of Better Men', JD's warm and self-deprecating paean to his musical heroes.  It's quite a list, as you'd expect, spanning Beefheart, Johns Cale and Coltrane, Prince Far-I and Mark E. Smith among others.  His honest placing of himself, Newton-like, on the beach as this musical tide washes up to his feet provides a telling punctuation mark to this performance.  Mine is but one of many tales, he seems to be saying; my answer yet one of many answers.  'If you don't think that you're a fucking idiot,' he announces as the song nears its end.
His may be one of many messages, but it's a deeply compelling one and  this is a deeply compelling collection.
Get it from https://germanshepherdrecords.bandcamp.com/album/live-on-the-independents-tour-2015-3-2.
Posted by Mark Whitby at 00:37 No comments: