Serafina Steer - The Moths Are Real 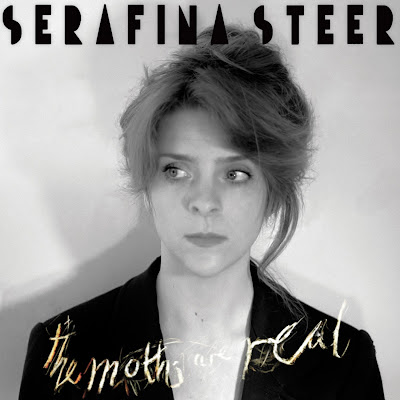 Serafina Steer's new album is generating the kind of attention inevitably accured from a Jarvis Cocker production, and it's ever bit deserved.  I first encountered her in a live performance at the Green Man Festival a few years ago and loved the quirky elegance of her performance which was replicated brilliantly on the Change Is Good, Change Is Good album.

Three years on, this new album is a different beast entirely.  Its opening track and first single 'Night Before Mutiny' is smooth and utterly sublime, eschewing the barely tamed angular edges of her previous collection in favour of a taut beauty underpinned by her bold yet delicate harp playing.  It's the track I've chosen for broadcast in my Dandelion Radio show this month, and I've gone for the longer album version because, frankly, anything this good needs to be heard for as long as possible.

Elsewhere, you get the punchy stridency of 'The Machine Room', the impudently singable 'The Removal Man' and, in 'Disco Compilation', perhaps the first instance of a harpist sharing space with glitterballs and giving way to intoxicating anachronistic rhythms apparently stripped from old Shalamar or Odyssey records.

Serafina Steer is an artist determined to get out of a box.  What the album shares with its predecessor is apparently a desire to make an album which has the harp as a lead instrument that is about as far away as your expectations as to what that might be like.  Like its predecessor, The Moths Are Real achieves this, differently, but brilliantly.

Mark W
Posted by Mark Whitby at 15:14 No comments: 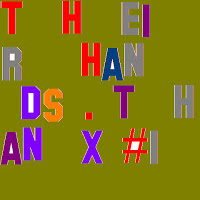 There are certain small record labels whose output, whether it rings my particular bell or not, is consistently interesting.  It's like unwrapping Christmas prezzies, finding that one that's CD shaped and wondering whether it's going to be the CD you really wanted or one that a well-meaning relative picked up in the bargain bin at Morrisons under the impression you'll listen to any old shit so it doesn't matter.  Or maybe it's a CD-shaped bar of soap, if such things exist.

Not that myhand.thanx records would ever unearth anything so crass or disposable, but there is that thrill, when encountering a new release on the label, that you never quite know what you're going to get; and I like it that way.

On their most recent release they've done even better, putting out a veritable selection box of previously unheard recordings from artists who've recorded for the label in the past under the title theirhands.thanks#1  Featuring seven tracks in all, it's predictably varied and predictably great.   Personal favourites Zoomonk and Hangin Freud certainly don't disappoint and Thomas W, to my knowledge the only artist ever to put a sample of my voice on a recording, produces one of his customary off-kilter masterpieces.

It's hearing all seven tracks together that's the real pleasure though, hearing seven artists, all challenging and innovative in their own right, rubbing up against each other on a single release is for me exactly how music ought to be presented.  I've attempted to imitate this spirit in the varied selection on offer in the three-volume Into The Light compilation on Unwashed Territories, to which Thomas W contributes another typically obtuse and brilliant offering, and also in my Dandelion Radio show, where this month I perhaps predictably include the Hangin Freud track from this album, and less predictably a track from Jacques de Villiers, whose music I admit hasn't really grabbed me previously but I shall listen to him with renewed attention after hearing his track on this compilation.

Better still, you can get this sampler of the new, innovative and darkly refreshing entirely for free here.  I hope you'll take the opportunity to grab a copy and bask in the often strange, always challenging but forever intoxicating world of myhand.thanx.

Mark W
Posted by Mark Whitby at 13:30 No comments:

Comanechi - You Owe Me Nothing But Love 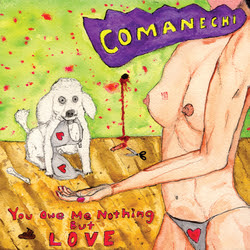 If you're stuck for a Valentine's gift for your loved one/partner/object of dangerous obsession this year, you might wish to be aware that the new Comanechi album is released by the Tigertrap label on that day.

Not that it's a benign alternative to chocolates and flowers, unless they're chocolates with spiked centres and venus fly traps, which would make a nice change in their own right, I suppose.  Despite the title, the characteristically noisy edge of Comanechi rightly destoys any tender sentiments lurking within and ensures that the active verb 'Owe' is the one that prevails.   This album demands.  The lyrics demand from their subject matter; the music demands from the listener; the whole thing demands your attention.  This ain't music for dinner parties, unless they're the kind of dinner parties where a serial killer turns up and fucks and eats everyone.

Much as the rest of the album's charms are difficult to resist, its undoubted centrepiece is provided by 'Patsy', a seven-minute plus elegy to depravity where Patsy herself takes the narrative voice to announce herself as an obsessive hell-bent on exposing herself to anyone finding him or herself in her vicinity; the tale of debauchery goes on to include graphic sexual confessionals including incestual liaisons with both her brother and her sister.

It ain't easy listening, so if you don't like easy listening then this might well be for you.   While you've got to wait till 14 Feb to get the whole thing, you can hear 'Patsy' in my Dandelion Radio show this month, and the album's first single 'Dream of Dream' drops on Tigertrap tomorrow.   Such delectable tasters will almost certainly whet your appetite for the rest of it, which will certainly allow this Valentine's Day to go off with a bang.   Rather than a romantic violinist of a visit from Interflora, try turning 'Patsy' up at full volume.  If your intended beau doesn't appreciate it, drop him/her and embrace the world of Comanechi alone.   Do you good, I reckon.

Mark W
Posted by Mark Whitby at 05:54 No comments: 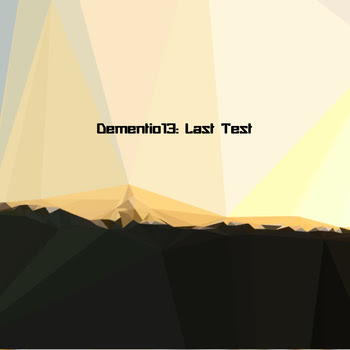 Well bugger me if he hasn't done it again.   So much electronic music relies on the dynamisms of repetition and monotony.  That is not a criticism.   There's a lot to be said for repetition and monotony and I like it very much, but these are not the dynamisms at work in the music of Dementio13, whose back catalogue is as consistently excellent as it is varied.   And those variations aren't just between the releases, but within them.

For all the superlatives I've heaped on this brilliant artists in the past, Last Test may be the finest expression of this yet.   The variety at the heart of this throbbing electronic monster sees Paul Foster, the wizard behind all this, venturing into even more wildly diverse territory.   You sense this is the work of an individual whose thrilling at every layer of sound he puts onto a track; in Last Test I'm suddenly aware that some other Dementio13 were, though I didn't realise it at the time, actually quite restrained in comparison.  This is Dementio13 getting attuned to the nature of the electronic beast that resides within its sound, releasing it and thrilling at the carnage it wreaks.

We'd had a glimpse already, when 'Zenit' was promo-ed on my Into The Light compilation - still available via the link by the way.   I assumed, quite reasonably I thought, that the track was destined to be the standout of this collection, but it turns out it's just one of a whole album of belters.    For my Dandelion Radio show in February, I've opted to play the stunted rave of album opener 'A Beat Called Don' but you really can't go wrong with anything on this eclectic yet uniformly great collection.

Hard to know where this musical project can go next, but I'd seriously advise you follow his adventures here and grab a copy of Last Test while you're at it.

Mark W
Posted by Mark Whitby at 11:49 No comments: