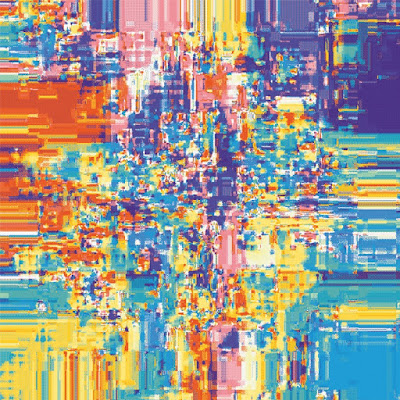 The Kythibong label so often manages to keep you waiting for a new release just long enough to get the old anticipatory juices flowing before hitting you with something so wonderful you forget the time lapse and just want to get on with playing the thing.
Such is the case with this album, coming your way in early May.  Three years on from his debut for the label, it shows Seal of Quality seriously stepping up to the mark and truly living up to his name.
It's not just the weird quirkiness or the clash of instruments intended for the purpose (guitar) with others not so intended (Gameboy) that make the release stand out.  After all, there are hundreds of artists attempting the same thing, few of whom manage to achieve anything anywhere near as good as this.
It's more that Seal of Quality manages to fuse these elements into something that leaves so few concessions to convention.  Drum tracks (on opener 'All Set Up', for instance), rather than simply providing a beat, chatter frantically like how Stephen Morris might have had he ever achieved his ambition of transforming into a machine.
'Push & Pull', which has been featuring in my Dandelion Radio show this month, is one of several breathless creations that offer a sense of these disparate elements clustering together, rushing to get to the same point.  The album's final and longest track, 'Deceiver', begins with a pretty much standard retro-futuristic vibe (think Blancmange battling with The Normal and losing, with greatly improved results) before you hear the chiptune noises and rhythmic patterns working away in there, ganging up into a tempo-altering frenzy that takes it - and you - somewhere else entirely.
It's astonishing at times that these tracks hold together so well, but hold together they do, most brilliantly.  Indeed, the overriding triumph of Affective Design comes in its ability to and produce something so defiantly melodic from all of this stuff.
Do I use the words 'worthy addition to the Kythibong catalogue' too much?  Probably, but it's hard not to.  More to the point, that's certainly what Affective Design is.  Get it on LP and CD here.

Posted by Mark Whitby at 00:59 No comments: Links to this post 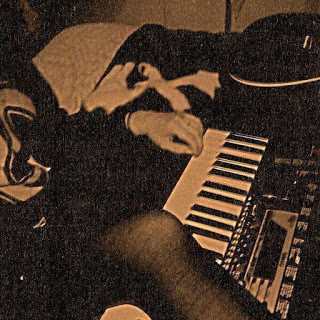 Formerly of indie pop band Chat Noir, Chloe Juliette Beswick's debut solo release sees her opting for a stripped-down approach that imbues those indie pop sensibilities with a sub-Velvets spirit of repetition and in doing so takes them somewhere else entirely.
On top of it all are Beswick's gorgeously fragile vocals that sound close to falling apart on the EP's title track in a JAMC 'Cut Dead' kind of way, held together by a melody that's simply close to fracture but gloriously engaging for all that.
It's a spirit that's present throughout the whole EP, five tracks all of which sound close to collapsing in on themselves but whose foundations have somehow been manoeuvred into a position that keeps them standing - somehow - and in the process enables the construction of something gloriously unique.
Stand-out track is unquestionably 'Bust A Move', a track that holds the aforementioned edifice together for more than five minutes.  Frankly, its straining vocals and bare, repetitive strum could go on forever and you wouldn't mind.  It's one of the best things 2016 has coughed up so far and I've been playing it this month in my Dandelion Radio show.
You can get the release as NYOP here.  Get it and keep an ear out for more from Chloe Juliette Beswick.  I sense this is merely the start of something very interesting indeed.

Posted by Mark Whitby at 01:27 No comments: Links to this post

St Helens band The Bordellos recently put out Volume 4 in this series of EPs, all of which dip into the archives to showcase brilliantly their uniquely appealing brand of lo-fi tinged with psychedelic inclinations.   It seemed a good moment to reflect on some of the highlights of the series so far, all of which can be downloaded for free here. 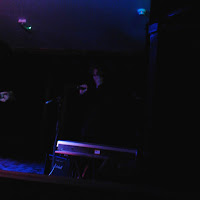 Volume 1
These Boots Are Made For Stalking (4 track version)
Not a twisted version of the Nancy Sinatra classic but a slowed-down, 'Sweet Jane' style confessional from a self-styled 'motherfucking crazy guy' who, among other things, declares his intention to be the padding in his target's wonderbra.   As it goes on, the music becomes more frenzied and 'Sweet Jane' becomes 'Waiting For The Man'.  Madly exquisite. 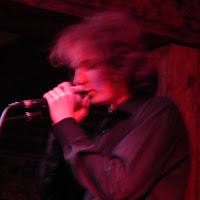 Volume 2
Sweet Hangover (Dandelion Radio Session)
Originally broadcast as part of a session recorded for my Dandelion colleague Jeff Grainger's show back in July 2011, this shows a gently nostalgic, reflective side to the band that surfaces every now and again and the world always feels a lot better for it. 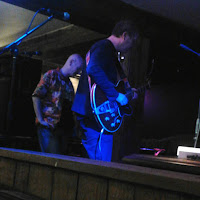 Volume 3
Poet or a Liar (Alternate Mix)
Delightfully woozy portrait of the artist 'praying for stage fright' and harbouring the belief that 'every line deserves a heavenly choir'.  And it draws you in so well you start to believe it.  One of their finest songs. 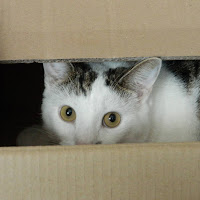 Volume 4
Punk's Not Dead
You can hear this in my Dandelion Radio show this month, a gloriously fragmented piece of tempo-shifting brilliance that manages, even at well under four minutes, to cram the spirit of punk and Nat King Cole together in its lyrics and make it work.

Clearly there's a lot more to come in this fascinating and highly enjoyable series so keep an eye on the band's bandcamp site for more.  They'll also be recording a second session for my Dandelion show later in the year.

Posted by Mark Whitby at 00:27 No comments: Links to this post

Thorn1 - The Leave of Leaves (Silber) 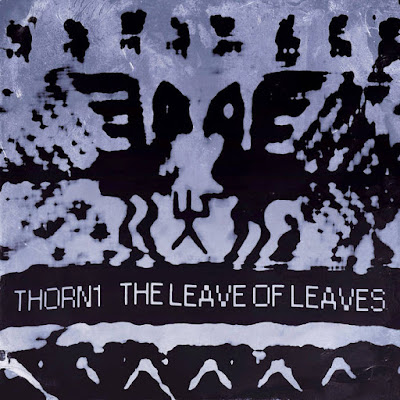 The Silber label constantly manages to put out releases of impressive diversity while always retaining a distinctive label identity.  Like 4AD in its great years, the hallmark of a Silber release manages to be both instantly identifiable and yet something you quite can't put your finger on.
This elusiveness applies also to one of my favourite Silber artists, Thorn1, the work of Siberia's Evgeny Zheyda, whose been putting together elements drawn from drone, slowcore and post-rock for ten years now, consistently producing rich tapestries that defy any kind of easy categorisation, which is as it should be.
The Leave of Leaves is yet another fascinating extension of Zheyda's musical journey.  Leading off, listeners familiar with his previous work might be surprised by the curiously upbeat, lilting melody of the title track, setting the mood for a collection that is probably Thorn1's most accessible work to date, leading into the twinkling, mesmerising 'Lorca', which I feature in my Dandelion Radio show this month.
Not that admirers of Thorn1's intensity should be put off.  This is no descent into the melodically trivial, as the heavy textures of the ten minute centrepiece 'Stun' more than adequately demonstrate.   The album should be viewed, rather, as further evidence of Zheyda's willingness to venture into new and unfamiliar places while, like Silber itself, retaining enough of what was there before to be identifiable instantly among aficionados as a Thorn1 release.
Find out more about the release and download the album here.  You might also want to check out and download other Silber releases here.

Posted by Mark Whitby at 04:10 No comments: Links to this post 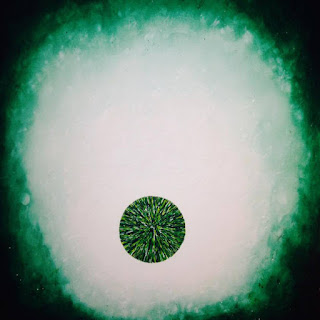 A couple of years ago, there seemed a real and very concerning possibility that Vert:x might be about to suspend activities indefinitely.  Thankfully that was a threat that proved to be short-lived.

Neil Whitehead's project returned, now with Vinnie C as his established musical partner, releasing the storming twenty-minute single 'Pure Golden Light' at the end of last year and now comes a fresh release of 'Annwn', produced by Earthling Society's Fred Laird, to remind us, if we'd been stupid enough to forget, why we love them so much.

The lovably intense drone at the heart of the band still remains, but there's an equally lovable playfulness in evidence this release.  Frowning over their instruments they clearly are not: ten-minute opener 'A Witch!', complete with telling exclamation mark, is the work of a band enjoying what they do and possessing the musical dexterity to transmit that with familiarly laid back ease.

It's an upbeat mood that permeates the whole release, from the swirling synths of 'Atom a.k.' to the nineteen-minute frantic head-shredding extravaganza of closing track 'Y ol i Annwn'.  I'm playing 'Surf Crayola' in my Dandelion Radio show this month, a track that puts space rock tools in the hands of a sixties garage band.  The result are, predictably, shambolically brilliant.

You can download some of the tracks here but it's seriously worth getting hold of the full CD version.  They'll also be recording a session for my show for broadcast some time in the summer - not to be missed, I would suggest. 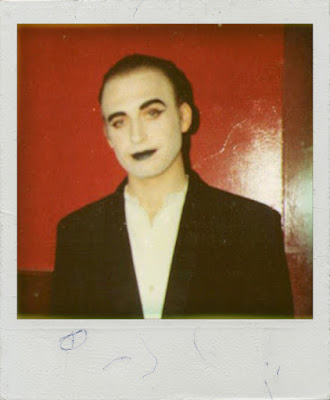 
B side from the single “Ihre Mutter ist ein Sex-Objekt” written by Klaus Eins and Dieter Zwei. The title says it all, but apparently Klaus had a love hate relationship with Bach as well as Dieter’s mother.


Opening movement from the concerto written exclusively for Klaus Eins’ beloved RMI Rock-Si-Chord keyboard. There are four movements, and although a fifth movement was rumoured to exist, it was regarded at the time as a movement in the wrong direction and deemed superfluous.


Unreleased track composed for inclusion on the “Zwei” album but cut after Klaus Eins decided he hated it. He later said it was actually better than some things which ended up on the album. “I was a bit up my own arse back then” he said later.


Another track which didn’t make it onto an album, this time the difficult third album “Authentisch Seltsam” or “Authentically Strange”. Dieter Zwei couldn’t think of anything to call it so he wrote down what he had for lunch. Once again they regretted leaving it out of the released disc, saying “Why anyone thought we knew what were doing is beyond our comprehension.”
You can find out more about Crowdrock, and download their recent EP, here.
Posted by Mark Whitby at 00:35 No comments: Links to this post