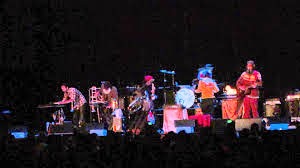 I've got a guy to the left of me in a Crass t-shirt and an elderly woman to my right doing some knitting.  In front of me is a young girl with multi-coloured hair and her bespectacled and be-anoraked boyfriend.  All are nodding away to the music while thirty or so people sway and occasionally groove as they queue good-naturedly at the Hippy Chippy van.  You couldn't be anywhere else but the Green Man festival.

There's another side to the Green Man, though, and one that was all too in evidence in the 2014 event which, let me be clear, was a triumph, though with some reservations.  The relaxed atmosphere that makes it possible for practically anyone to enjoy themselves at the festival may yet, I fear, turn out to be its undoing.  At times, those festival abominations camp chairs stretched out so far before the Mountain and Walled Garden stage those who wanted to do the decent thing and stand to watch the bands found it difficult to find a space in which to do so, and were occasionally clucked at when they occupied a position in front of someone's seat: not very often, though, because more often than not the person in it appeared not to be showing a blind bit of interest in the music and all too often was in the process of spending hours with his/her back to it, his or her interest far more engaged by the contents of a Green Man Growler, Goan Fish Curry or Pieminster pie.

If Green Man isn't careful it's in danger of becoming little more than somewhere the middle classes can spend an August weekend in a relaxed liberal arts atmosphere with fine ales, superb scenery and unchallenging music.  For many who come to the festival, you sense that's what it already is.  It needs shaking up and one way to do it is to get rid of the far too many bands filling out the schedule this year who offered little more than background music to this cosy scene.
Fortunately, you can create your own excellent Green Man schedule by picking your way around the stages and there was plenty on offer to challenge those who wished to be challenged, and occasionally upset those who didn't.  Neutral Milk Hotel (top) played a storming set to close the main stage on the Sunday night, for example, but it was telling how many picked up their chairs and vacated the scene early in the set: classy Americana they like; the kind that NMH trade in, with its sophisticated and disjointed wooziness, clearly demanded too much concentration for those who wished to be passive recipients rather than active participants in the Green Man, which was always a big part of its point.

Slint, in the more receptive environs of the Far Out stage, found themselves with an audience largely made up of Slint-ites and therefore their characteristic refusal to make concessions was warmly and eagerly received, though their remarkable ingenuity and deftness of touch was lost on a bunch of girls behind me who disappeared complaining that they'd expected something a little more like the Foo Fighters based on what the programme had said.  Dunno where they got that from.  The sound wasn't great for their set, but then this band must be a sound engineer's nightmare: the overall effect, though, was mesmerising.

Others in the Far Out marquee made highly memorable contributions: Plank's sledgehammer attack of a few years ago has developed some intricacies but is none the worse for it.  Jupiter C, whose single from earlier this year I've been playing in my August Dandelion Radio show, revealed a bewitching promise well beyond the evidence I'd encountered previously.  James Yorkston played one of those sets of his that are half serious and half arsing around but he and his band made it work.  The short set Tender Prey delivered in the Cinema tent was highly enjoyable, while Talisman's performance in my one visit to the Chai Wallah on the Sunday night was every bit as good as you'd expect from one of the finest reggae bands Britain has ever produced.

Despite the cosiness demanded by too much of its audience, the Mountain Stage offered more highlights than is often the case.  Angel Olsen, a woman who could easily cut an easier path through the facile music industry by trading on her looks, instead takes a more difficult and far more interesting path, her sulky on-stage persona brilliantly matching the Cohen-esque richness of her delivery; like Olsen, Samantha Crain brought to life one of the finest albums of recent times in an exquisitely crafted and engaging performance in the Walled Garden on Sunday night, while Neko Case also didn't disappoint, one of the most distinctive voices of our age showing no ill-effects in what was her last live appearance of a lengthy tour.  Also on the Mountain Stage, veteran Cornish troubadour Michael Chapman added his considerable weight to the proceedings, providing one of the early highlights of Green Man 2014 and one that was only occasionally bettered throughout the long weekend. 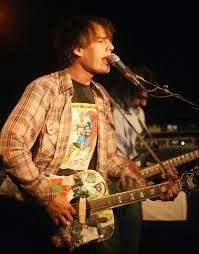 Only Jeffrey Lewis and the Jrams (right) managed it. I'll be surprised if most of the mainstream reviews tell me I ought to have been watching The War On Drugs at the time, but for me Lewis is as close to unmissable as music gets and he didn't disappoint, raking brilliantly over the content of several albums (and he's never released a bad one) and leaving us, among many highlights, with an astonishing rendition 'Williamsburg Will Oldham Horror', as perhaps this festival's greatest moment.  I wish some of the chair-carriers had been able to see it above the heads of the highly appreciative crowd that swarmed around the front of the stage - would have done them good, I reckon. I suppose the issue I have, however, is that all of the above were artists I anticipated delivering the goods before I set out on Thursday morning.  I'm pleased they didn't disappoint, but for me so much of the beauty of the Green Man lies in the discovery of great new stuff.  This year, for me, only the excellent Frank Fairfield (left), who blew an appreciative crowd away with his startling re-imagining of songs of the old west, really did the business on this score.  Others I went to see on the off-chance of something interesting happening ranged from the ordinary to the truly appalling.  I won't name them because I don't believe in wasting words on music that doesn't do anything for me, but, among all the great music on offer, there was a gaping, disappointing hole in the middle of this festival and it needs seeing to because I suspect it, and the apathy of too much of the crowd, are two sides of the same coin.

The Green Man Festival is something that usually manages to surprise and delight in equal measure.  This year I'm happy to report that there was plenty to delight, but we were sadly lacking in surprises.