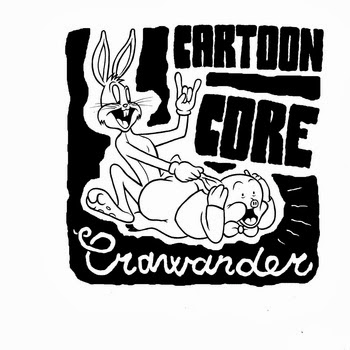 To be honest, I'd almost given up on it, thought they must have broken up or something, so long had I been waiting for the debut album from CRAWANDER, which was mooted well back into last year.  As it turned out, all I really had to do was check the band's Soundcloud site, where many of the tracks have been available for months.  That'll teach me for not paying attention.  Thankfully, the band were, and a message from them put me right.  The album's now available and it's called Cartoon Core.  Was it worth the wait?  You betcha.

If the smattering of teaser downloads that surfaced last year were anything to go by, the clear suggestion was that CRAWANDER might well be the best band in the world at the moment.  It was a big call, but Cartoon Core confirms that promise.  The sixteen tracks include those teasers, including the playfully acerbic 'Pro Bono Vox', the storming 'Prophit' and my personal favourite, 'No Problem Like My Problem', which includes perhaps rock and roll's finest ever lyrical reference to eating pizza. 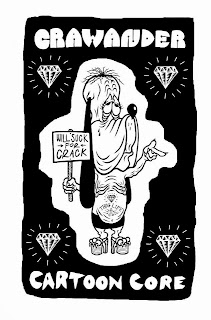 The new tracks don't disappoint either.  'I Hate Teenagers', which I'll be playing in my October show on Dandelion Radio, and 'Sirens', are fine examples of the vibrant frenzy that characterises this band's approach, comparable with anything that came out to whet our ravenous appetites last year, while album closer 'I Sense Death' is a churning growler of a finale that makes you want to run through the whole thing again.  But it seems wrong simply to pick out examples, because there's simply not a bad track on Cartoon Core.  In fact, there's not even an OK track here: the same level of excitement and energy is maintained throughout and every one is an absolute corker. 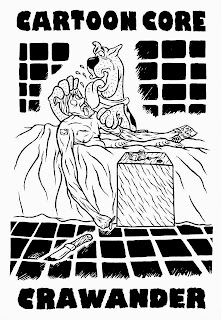 The band's facebook page has a biography that suggests they're an original beat combo from Liverpool.  Clearly there's something here that fits in with the whole odd and playful aura surrounding the band's identity, though I can't quite work out what (which is possibly the point), but my understanding (unless this is part of it too) is that they're from Croatia.  But none of this really matters, because where they really belong is in my music collection, and I would suggest they should find a place in yours too.

Get the album from here.

Individual track download of No Problem Like My Problem if you need to, but just skip it and go straight to the whole thing.

The Flatmates: A Legacy Worth Returning To 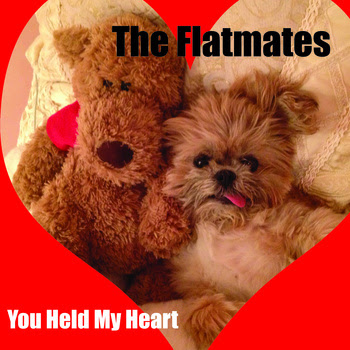 The original line-up of The Flatmates came together in 1985 and quickly became one of the key bands of the C86 era.  Back when there was such a thing as a meaningful indie singles chart, The Flatmates recorded six singles within a two-year period and every one reached the top twenty.  Now, guitarist Martin Whitehead has reformed the band with original drummer Rocker on keyboards and three new members and they've got a new single out, 'You Held My Heart', which you can catch, among other places, at the end of my September show on Dandelion Radio, streaming at various times throughout the month at www.dandelionradio.com.

It’s fitting that the band should choose to reform now, with indie pop enjoying somewhat of a renaissance and so many cracking young bands around paying undisputed homage to The Flatmates and their C86 brethren.    At my recent foray to the Green Man Festival, among the many and varied delights on offer, by far the most exciting new discovery for me were the Argentinian three-piece Los Cripis, who belt out their own loud variety of old school indie with a deliriously infectious energy.  And they certainly aren't the only ones doing it. 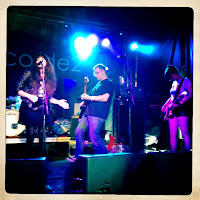 It may be felt that, in returning to take their place among so many perky young offspring of the music they brought so much early life to, The Flatmates might run the risk of appearing mere tired old folk, like the embarrassing dads and mums who wreck the kids’ party by dancing like chickens.   Any such doubts are dispelled with one hearing to the new single, which comes out via three separate labels, no less: the band's original Subway Organisation imprint, Rocker's Local Underground and Archdeacon of Pop.  It's a sublime piece of indie pop, written by new vocalist Lisa Bouvier, and backed by a Whitehead composition, 'One Last Kiss'.

Band reformations can, it’s true, be a hit or miss affair, but The Flatmates have returned to the party with a bang in the form of a cracking release that ensures the wave of bands they helped inspire welcome them not as mere godparents who deserve respect for what they did almost three decades ago, but as a force that remains as productive and as stimulating as it ever was.

Get the single here or here. 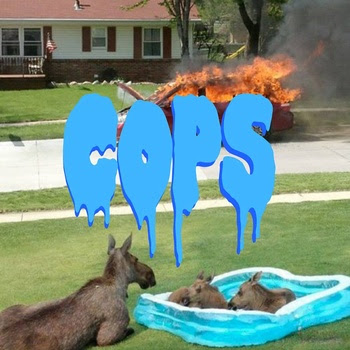 For those not familiar with COPS, I expect ears to prick up considerably when I mention it's a new project from Harry Cloud, whose Indian Pussy album so delighted me last year and which I probably even under-valued until I found myself getting stuck into it repeatedly towards the end of 2013.

For this project, Harry's teamed up with Chloe Mandel and Paul Roessler and together they've put out this three-track EP, which you can get as name-your-price at their bandcamp site here.  Unless you're one of those sadly inadequate individuals who found Harry's album last year - and, indeed, Ocean Song, which I rather clumsily overlooked the release of earlier in the year - a tad on the brutal side, you're going to love this project, which loses none of what made Indian Pussy such a triumphantly violent ride through the sensibilities of humanity and adds some sublime touches into the bargain.

Cry Now, Cry Later doesn't ask for much - less than twelve minutes of your time, in fact - and gives a hell of a lot back.  Opener 'Tiny Little Hole' might even charm you, its slowly evolving riff growing behind voices from the primordial soup of some semi-apocalyptic soundscape, before 'Somebody Shitty Hitting On Me' lays a breathy female vocal across undulating guitars.  I've chosen this track to play in my September show on Dandelion Radio, which you can hear streaming at various times through the month, although I might easily have gone for 'Deserve To Suffer', the EP's final track, which takes what I assume is Chloe's voice over a buzzing riff and meanders through the enigmatic corridors of sound that are plastered all over this fine release.

COPS have a pugilistic appeal that's served slowly, via sludgy masses of ground-out noise, but is no less powerful for it.  Indeed, their oozing packs a far more lasting wallop than so many of the visceral speed-merchants I stumble across on my daily search for something to tickle my increasingly warped fancies.  Allow me to save you much unfruitful browsing - go straight to COPS. 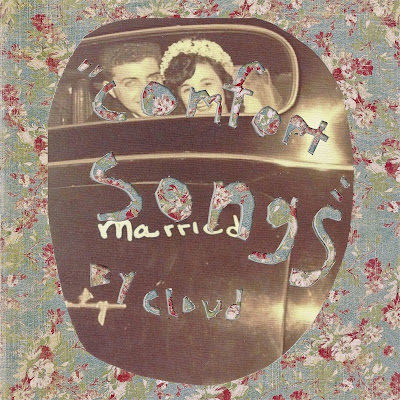 Does this review even need to be written?  So much has been said already about Cloud's Comfort Songs that it would probably suffice simply to give an overview of reviewers' comments, such as Pitchfork's view of it as 'astoundingly accomplished', Tom Ravenscroft's 'a great record', the 8/10 awarded to it by Drowned in Sound or the 10/10 from Contact Music, all of which simply scratch the surface of the praise heaped on what is unquestionably one of 2013's finest achievements.

But to do so would just be lazy and, although I'm quite prone to laziness on occasions, it wouldn't do here and I feel the need, albeit belatedly, to add something myself.  On approaching Comfort Songs, I had the same feeling I got when listening for the first time to The Flaming Lips' The Soft Bulletin.  Not that there are that many stylistic similarities, but these are both releases that hit the listener in places you didn't know were even part of you.  They possess a transcendent appeal.  You're never sure what's going to come along next, are never able with any absolute security to anticipate the next chord change or where the song's structure will take you.  An album that aspires to greatness must have four or five such moments: here, Cloud lays them across all eleven tracks. 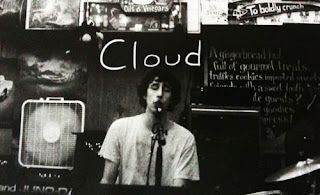 I played the single 'Mother Sea' in my August Dandelion Show, a preview that gave us fair notice of what to expect, and yet still it only scratched the surface of this amazing collection, containing only barely a hint, for example, of the whimsical beauty of 'Wish Little Fish' or the epic magnificence of 'Desperation Club'.  At the moment I think 'Authorless Novel' is my favourite track on the album, a meandering, bewitching piece of music that can take you anywhere without you ever feeling you know it completely.   Hear it in my September show on Dandelion Radio.  Audio Antihero, who've already brought us so many great things in the past and during this year, have surpassed even their own high standards with this release.

So often it's the case that a new album captivates me for a few weeks or perhaps at best months before I move on to something else, such is the sheer wealth of great music around.  But this is one that I know I'll be going back to again and again for the rest of my life.  When a certain mood strikes me, and where formerly I reached for The Soft Bulletin or Grandaddy's  The Sophtware Slump now I'll be making my first move in the direction of Comfort Songs. 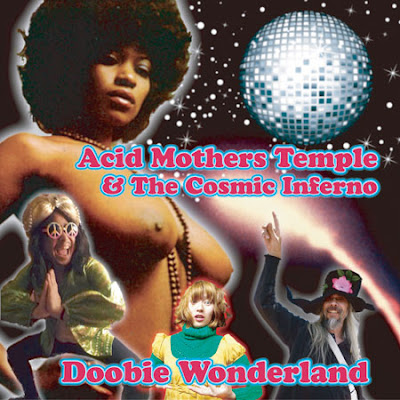 I thought I knew Acid Mothers Temple.  Hardly a surprising claim, since they've been knocking about in some form or other since the seventies and have a steady stream of fine releases to their name, dabbling in all sorts of genres from Prog Rock to space rock to German experimentalism and doing it consistently well.

Hence my surprise that Doobie Wonderland doesn't merely continue this absorbing history, but adds to it and expands on it.  I might even stick my neck out and say it's the best thing Acid Mothers Temple have ever done.  In fact, sod it,  I think I will.  This is Acid Mother Temple's best work, taking all the aforementioned elements and adding to the mix crazy funk experiments and disco parodies that Funkadelic wouldn't have turned their noses up to and coming up with a frenzied cocktail of sound that adds intoxicating life where once there had been only doom, albeit intoxicating in itself. 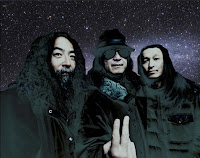 There are five tracks on Doobie Wonderland and they're all stunners.  You may have heard me play the woozy krautrock of 'Planet Golden Love' in last month's Dandelion Radio show.  Whether you did or not, tune in this month where you'll hear over eighteen minutes of 'M.J. Love 666', which if anything is even better.

For once, a great band's shifting line-up hasn't led to any decline in their potency.  On the contrary, this is a revitalised Acid Mothers Temple with a new approached that has refreshed parts we didn't even realise needed refreshing.  It's also one of the best albums of the year so far.  Full marks to the excellent Parallax Sounds for putting it out.  Get it here.
Posted by Mark Whitby at 11:21 4 comments: