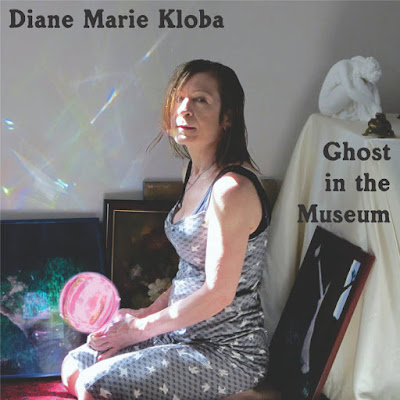 It's been well over two and a half years since we last heard an album from Diane Marie Kloba, the excellent 'It's is All an Illusion', so inevitably news of this new collection was greeted with a keen sense of anticipation.

I certainly haven't been disappointed.  The warmth and intimacy that lay very much beneath the surface in her last album is much more prominent here.  There's an emotional honesty that gives her a clearer musical voice on Ghost in the Museum and perhaps this will bring the broader attention her music so richly deserves.

Thankfully, that's not diminished the angular quality that makes Diane such a unique artist.  'Ancient Art', the album's opener, works as a title track of sorts, enticing us into the museum and 'making you imagine what you never knew you knew'.  Which is as good a description of her music as you'll get: in Kloba's hands, ancient pre-existing musical notes are dragged into the world and twisted into new, enticing shapes.  'The answer is already in your mind' we're reminded in 'A Thousand Pretty Strings', one of the album's many highlights.

Among the tracks here are two re-workings of tunes Diane recorded in session for my Dandelion Radio show in July 2014. One of these, 'Rescued', features in my show this month.   It's significant, perhaps, that the track then was called 'Rescue': the past tense here allowing it to pick up again on the album's theme of reclamation, this time via a rush of remembered images of a perfect love glimpsed, clasped and ultimately given powerful new life via memory.
You don't just listen to a Diane Marie Kloba album: you live with it and absorb it. The reason there's a danger of that sounding like pretentious bollocks is that we're so familiar with artists who declare that kind of intent invariably failing to live up to their own professed vision.  Kloba makes no such claims: the music does the talking and the pointed whisper of Ghost in the Museum is the most beautiful articulation we've heard from it yet.

Get it as CD or download here.
Posted by Mark Whitby at 03:31