This month marks the 10th anniversary of the death of the great John Peel.  21 of his favourite bands and artists have contributed tracks to a free Unwashed Territories compilation to celebrate his legacy. 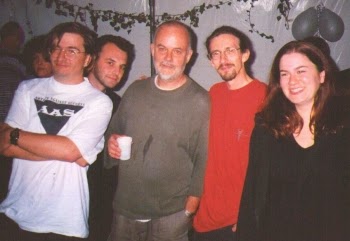 Cuban Boys burst into the consciousness of Peel listeners in 1998 with the audacious 'Oh God They Killed Kenny' and into that of the rest of the universe in 1999, when 'Cognoscenti Vs Intelligentsia' threatened world domination, leading to this most idiosyncratic of bands engaging the temporary interest of EMI and generating a saga that illustrated the yawning gap between the conservative standards of the mainstream record industry and the true guardians of innovation and creativity.

Recorded entirely in the Cuban Boys' luxury bunker, this chart-bound sound has been expanded from its original form to provide a heartfelt tribute to John Peel.  As tradition dictates, the Cuban Boys have made it as anti-commercial as possible with the aim of providing a personal reflection on the friendship and amusement the band shared with John.  As the band suggest, 'It is like listening to a broadcast of a John Peel Roadshow in Clitheroe where the only act the BBC had the budget to hire were That Petrol Emotion but they broke down on the motorway and the Cuban Boys had to step in to pacify all the Mabels.'

Get your copy of 21 Songs for John for free from here.
Posted by Mark Whitby at 23:54