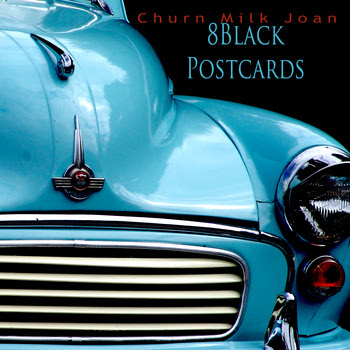 It's been a good year for improvised music.   I'm currently enjoying wallowing in the elongated jams of Keller (something from them in my April show) and the Mystical Weapons album was probably the first really outstanding release of the year.   Now the latest collection from Churn Milk Joan is upon us, a five-track monster that's the result of impromptu recording sessions in Hebden Bridge, and it's another stunner.

On the evidence of this, improvisation suits Churn Milk Joan.  For this release Colin Robinson and Richard Knutson are joined by Marian Sutton and Pete Scullion, guitarist with Colin in Block 454.   As I'm a fan anyway, and so never really want their records to end, the prospect of luxuriating in the products of lengthy krautrock-influenced sound experiments immediately tickled my fancy.

But that doesn't really describe what I found, which is actually much much better.  These are not the twenty-minutes plus epics favoured by Keller, but instead the improvised jams have provided an opportunity for the band to unleash their brilliance in a looser framework rather than merely indulge themselves, and the results are even more wonderful than anticipated.

The five pieces on 8 Black Postcards all warrant attention in their own right, but it's the second track 'The Letter (episode 1)' that for me represents the best work of Churn Milk Joan to date.   Characteristic of the album as a whole, its eight minutes do not become a stretched palette onto which the band paste meandering sound collages, but instead yield a taut percussive backdrop against which sparse guitar patterns interweave, Tago Mago-esque musical interludes rise and fall and something not unrelated to a funk vibe drags you into a sonic blender into which sounds are tossed before coming out of the other end entirely transformed, as indeed is the listener.

As usual, you can get the release as name your own price from the Churn Milk Joan bandcamp site and you won't be surprised to hear that I've seized the opportunity to feature 'The Letter' in all its lengthy majesty in my Dandelion Radio show this month.   You'll hear a band who've ceased to be simply an interesting afterthought to enjoy in the gap left by Block 454 and have now confirmed themselves as a fascinating musical proposition in their own right.