Dissolved - Surge of the Lucid 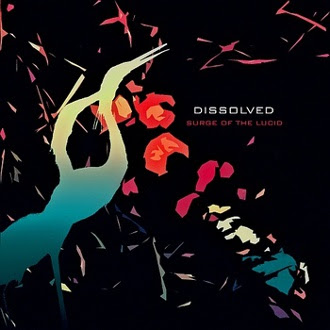 Just when you think the Daddy Tank label can't astonish you anymore - this drops through the letterbox.

I've enjoyed Dissolved's releases before, of course, and his Snowy Psychoplasmics album in 2011 was a masterpiece in its own right. I suspected he wouldn't top it, but he has, comfortably.  Surge of the Lucid is the best album I've heard so far this year and it's laid down a mark for 2013 which even the venerable Daddy Tank themselves will struggle to surpass.

You always get a kaleidoscopic collage of mind-bending sounds on any Dissolved release; but here the kaleidoscope consists of colours that are off the spectrum and sounds that collide to form shapes that seem impossible in any conventional universe.  That I don't much want to live in a conventional universe may be the reason I find that so appealing.

'Your Age In Shark Years' juxtaposes sublime harmonies and interjected speech with jagged, spiky beats;  'Seimantrasm' floats along on a miasma of disturbed melody; the astonishing 15-minute album closer 'On Board The Deuterium Arc' rides a panoply of troubled beats towards landscapes that may or may not exist: something like half-way through, you realise it doesn't matter and the only thought that persists outside this sonic mind-storm is how the track somehow supersedes even what went before it.  Then you put it on again and think that probably it never did.

OK, but it's hard not to disappear up your own arse when trying to assemble into words something so great it defies any form of rational judgement.  If I occasionally manage to step back and appraise the album's brilliance from something like an objective viewpoint, I realise my favourite track is the just-under-ten minute 'Forgotten Processes'.  I'm playing it as the opener in my March show on Dandelion Radio, which means you get to hear it without any burbling from me prior to it, I presume, grabbing you in the monster-like grip with which it now holds me.

Apparently this is Dissolved's fiftieth release, which is quite something in itself.  I can't imagine there are any other artists who could commemorate this considerable milestone with anything anywhere near this good.   Get it from the Daddy Tank site - your senses will love you forever: all of them.
Posted by Mark Whitby at 13:36