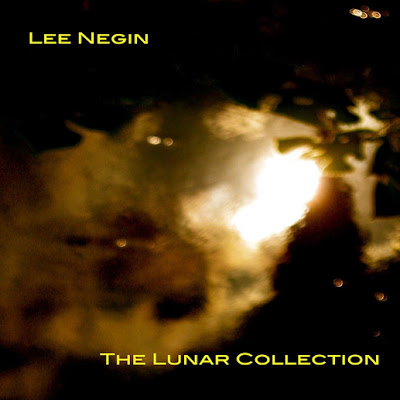 As will be clear from anyone who's either read this blog or heard my Dandelion Radio shows in the last couple of years, I can't get enough of Lee Negin.  There are some electronic artists who dabble in a form that, if you're not absolutely aware to its vicissitudes , will quickly swallow you up and drain very quickly any creative energy you once had so that you, very quickly, become stale and predictable.   Lee Negin is not one of those artists.

Negin expertly controls his sounds, never a slave to a rhythm or a preconceived idea.  Here, he moves dextrously between the sparse and atmospheric, as in the nine minutes plus of opening track 'Commute', to the rumbling intensity of 'Cosmic Ooze' while still able to step into the sub-tribal beats of 'Cheeze Sticks' when the mood takes him.  Throughout, snatched voice excerpts play around the beats like enigmatic satellites of sound with no pre-ordained orbit.  In Lunar Collection, even more than in other recent releases from this remarkable artist, you're never allowed to dwell in familiar surroundings for long.   The atmosphere around Lunar Collection is light, the hold of gravitational laws tenuous.  It makes for a listening experience that's as stimulating and challenging as it is enjoyable.

I've chosen the masterfully ironic 'Spare The Rod' to play in my Dandelion Radio show in April, which will begin streaming on Easter Monday.  The track winds loosely structured beats and sound patterns around snatched soundbites dictating moral strictures and battered American conservative mores, pummelling them purely with the weapon of expertly deployed sound structures.  In the universe inhabited by this album, no such simple-minded rhetoric can hope to survive: easy concepts are warped and mangled into obtuse shapes, and quite right too.

You've got to be an artist extremely confident in your abilities as well as highly proficient to put together an album this diverse and yet make it hold together as such a sublime whole.  Lesser artists would opt for a single style and hide behind its unifying mass, claiming thematic consistency as the greater good.  Lee Negin, as we've observed, is not such an artist.

Get a copy of the album here.  Then take it home and put it on repeat.
Posted by Mark Whitby at 02:53