Diane Marie Kloba - I Am An Unknown Artist 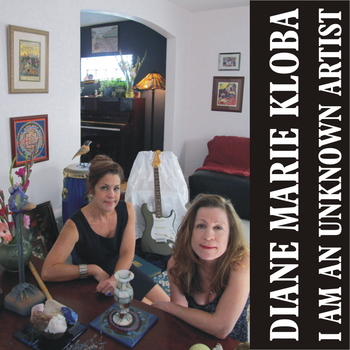 Chicago-born poet and performer Diane Marie Kloba first announced herself to my ears when she contributed backing vocals to a track on Laurence Made Me Cry's fabulous The Dairy of Me album.   Which means that, thankfully, she's no longer an unknown artist to me and inevitably the title of this collection becomes an immediate anachronism as soon as you hear it.

That's just the first of many little tricks the release has up its sleeve.  For a start, the list of Kloba's influences on her website didn't prepare me at all for what to expect.   Citing Dylan and Wilco alongside Radiohead and Arcade Fire led me to anticipate something in a singer songwriter vein accompanied by arch and intelligent musicianship, underplaying expectations of the creativity that lurks in every crevice of this release. 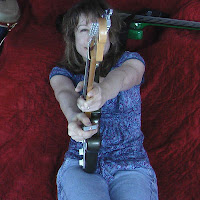 Thankfully, the album soars well beyond such influences so that any genuine source of inspiration is undetectable beneath its considerable wings, which span instead all manner of preoccupations from jazz to post-punk, from performance art to stream of consciousness poetry to the extent that ultimately you discard all musical landmarks and just appreciate this remarkable collection for what it is.

It's something not bound by style descriptions or by musical conventions.  At times - as on 'That's How It Goes' - the narrative quickly escapes any musical constraints and the result has a disjointed fascination that few of Kloba's listed musical heroes could ever hope to obtain.  There are times when the jagged instrumentation attains something akin to a definable and sustained riff - as on 'Diane Has Words' - but once again the restless zeal for experimentation in this artist's work never allows anything predictable or conventional to settle on it before the music escapes once again, bidding the listener to follow only as a sonic explorer.  'It Was Me' has the temerity to spin off still further, into a courageous and deeply endearing realm of humour.   Kloba plays with sound, and sometimes it even plays back.

It's music for those who want to explore, but in Kloba you won't find a tour guide or an artist who bids you follow like some avant pied piper; rather, her signposts are fleeting and elusive in an album that demands as much from the listener as it gives.  I'm playing the track 'Fast Forward' in my Dandelion Radio show this month.  I reckon it's as good an introduction to her music as you'll find anywhere on this collection, but the important thing is not to stop there because the album demands to be heard as a whole, and repeatedly.  Kloba's made it easy for you to do this - the twelve tracks are available on her bandcamp site to download for only $1 or as a CD for $4.   For that, you're getting the kind of listening experience that can never be limited to a single sitting, which strikes me as one hell of a bargain, and then some.
Posted by Mark Whitby at 10:18